Get it now here.

To adapt to the prevailing trends and rules in the software world. We decided to implement semantic versioning, which we should use for a long time. This issue item will brighten further way of versioning.

Starting from the 4.80 version, we will implement the new meaning of version number. According to the semantic versioning rules, the next GrandNode releases will follow the specified pattern - X.Y.Z
Where X is a MAJOR release, Y is a MINOR release and Z is a PATCH release.

How we will distinct each release and what will trigger the next release? Starting from the beginning, the MAJOR release will be strictly related to technological changes. For example, 5.y.z will be released when we will implement the .NET Core 5 to the project.
In the MINOR releases, you will find changes related to the application functionality. For example - we want to implement the Voice Virtual Assistant features, we would need to make a MINOR release.
And finally, the PATCH releases will be the most frequent, they will contain bug fixes, tweaks in the CSS, CSHTML files. There is an important requirement, that changes in PATCH releases cannot interfere with the application's source code.

The update frequency is as follows:
MAJOR only when a major upgrade related to .NET Core, MongoDB, or other technology that GrandNode uses, changes are required. We are unable to predict how often. MINOR every six months. PATCH much more often, not less than once a month. Importantly, the release of the new PATCH version will not require uploading new plugins. NuGet Packages will be updated only in MINOR and MAJOR releases. 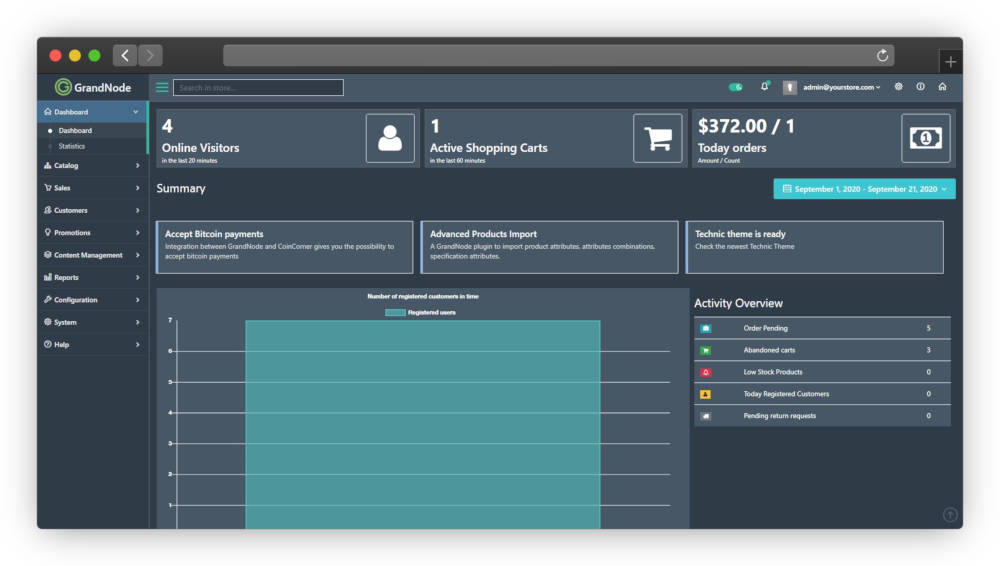 The new theme comes with a lot of cosmetic UI changes. Instead of standard checkboxes, you will see the modern switchers. 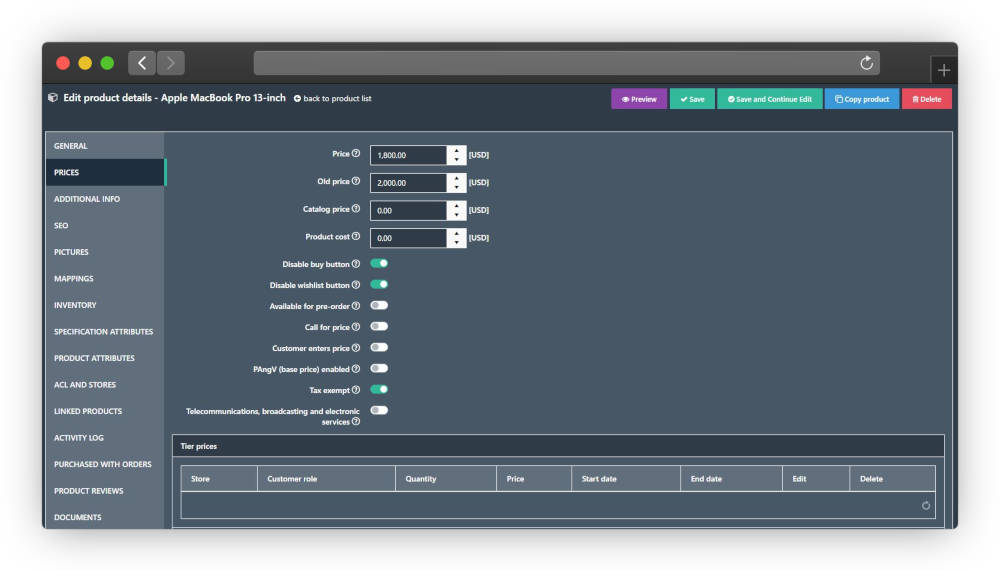 Extend API to allow to use Swagger UI

Starting from 4.80.0 you can use the Swagger UI feature. Swagger UI gives you the possibility to test the API requests directly from the Admin panel.

Implement Serilog logging for ASP.NET Core in the project

Advanced logging handled by Serilog. Write the log to the console, file, or sent it directly by e-mail. To configure the Serilog logging, please go to App_Data/appsettings.json file. Inside you will find one of the most common examples of Serilog usage. By default, it's commented.

We removed the iTextSharp library, and implement the WKHTMLTOPDF instead of it.

GrandNode 4.80.0-beta comes with an advanced permissions management system. Instead of typical true/false permission, you are able to create any kind of actions, by default we've implemented permissions such as List, Preview, Edit, Create, Delete, Export, Import. So if you want to give somebody access to list of orders, but you wouldn't like to give him permissions to each order, you should use the List permission.

Possibility to create sub-accounts for customers

From the new version, each user can create sub-accounts for his employees. If you create a company account, there is nothing to prevent all your employees from placing orders from independent accounts. All orders will be visible on the main company account anyway. It is a very useful functionality in B2B stores.

To fully support the new rules of personal data management, we've implemented a mechanism to manage cookies preferences. It will be described in an independent blog post.

9/28/2020 11:56 PM
Congratulations 🎉
Newsletter
Sign up to newsletter and stay in touch.
Wait...
By submitting this form, I agree to the data entered being used by GrandNode for sending newsletters. If you want, you can unsubscribe at any time by using the link visible in the footer of emails sent to you.
Learn more about privacy policy.
back to top
Filters
My account Close