1. Introduction to NoSQL vs SQL comparison

A database is an integral part of each e-commerce, because it gives the possibility to store, organize, and manage each kind of data. People related to databases environment are constantly creating new improvements. For sure, no one will agree on whether a relational or nonrelational base is better. First of all, it is very difficult to unequivocally state which type of database is better. Each of them has its pros and cons. There are projects in which NoSQL databases are unfit, as well as projects in which we won’t be able to successfully deploy SQL databases. There are also a lot of myths about these two types of databases. I hope this article will brighten you the basic differences between NoSQL and SQL databases.

If we take into consideration the latest DB-Engines statistics, it shows that SQL stands firmly on top, however we can be happy that MongoDb is the most popular NoSQL example. So we can be sure that we bet on the correct tool. If you are curious about the NoSQL vs SQL comparison, you should definitely make coffee or tea and sink for a moment in this article.

2. What is the NoSQL database?

When people say "NoSQL" they usually think about the non-relational database, rest of people when they say "NoSQL", think about non-sql, however, it doesn't matter how will you name it, everything comes to the fact that you store data in a totally different way than in relational (SQL) databases. The biggest misunderstanding is a common saying that non-relational databases don't store the relationship data. Of course, they do it, but in a different way than you know from relational databases. That's why it's worth to choose NoSQL in e-commerce. NoSQL is a non-relational database, which is not structured in a table form like SQL are. Mostly, the stored data doesn't have a schema and is document-based with key-value pairs. What does it mean in practice? You can store data in a more flexible way because we don't need to prepare a schema.

Mostly, in smaller online stores, smaller applications, the scalability of the NoSQL database is on a similar level to the SQL database. Instead of SQL databases, NoSQL is scalable horizontally, which means that you add servers to your database. In the case of bigger platforms with a larger number of data, NoSQL scales better than the SQL database and it's easier to do it.

The popularity of NoSQL is growing faster than anyone thought a few years ago. Even if it's a pretty young solution and the community is not as large as in SQL databases, you won't have problems with finding proper documentation or troubleshooting some issues.

Abandonment of structure and schema gives you much more flexibility than any of SQL, relational databases.

3. What is the SQL database?

Structured Query language, commonly named as SQL is the standard language used to communicate with relational databases. When I say relational database, I mean table-based database. Commonly, these databases are called SQL databases. As a SQL developer and SQL programming, you can easily perform actions like search, insert, update, and delete database data. Even if we are not fans of SQL, it's a powerful language, which is a very safe choice for a variety of projects.

It's a common truth that SQL databases have a larger community. It doesn't mean that NoSQL has a worse community. It's just information that relational databases are older than NoSQL.

SQL database can be applied to almost any type of project, with a variety of additional tools, it makes it a very powerful database system.

We can notice a great trend that shows the growing popularity of NoSQL databases, however, it's still true that relational databases are more popular. In this time I would point different things. For us, personally, fantastic trend appeared. The popularity of open-source database systems is rapidly growing and is almost higher than popularity of commercial licenses. What does it mean for us? Many people will look for the databases with open source licenses, so rather than use based on the MsSQL e-commerce platform, they will choose GrandNode, which is based on MongoDB, open-source NoSQL e-commerce platform. 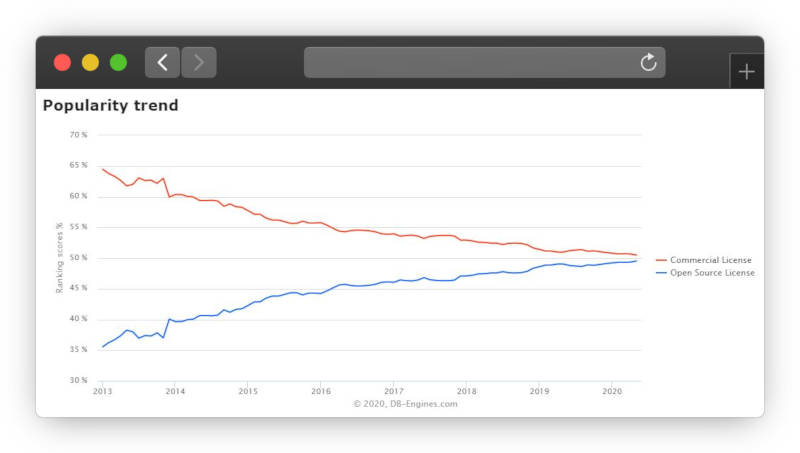 5. The most popular NoSQL databases

Below is the list of the most popular NoSQL databases, instead of MongoDB, open-source database engine, you will find also few more examples:

MongoDB is nothing more or less than a document-oriented NoSQL database, commonly and mostly used for high volume data storage. Instead of creating and using tables and rows as it's in the traditional SQL (relational) databases, MongoDB makes use of collections and documents. What are the documents? Documents contain key-value pairs - basic unit of data in MongoDB. MongoDB is a database that has been released around the mid-2000s.

In a nutshell, Cassandra is a free and open-source NoSQL database management system designed to handle large amounts of data across many commodity servers. The key is to provide high availability, without any kind of failures. Behind the Cassandra is the Apache company.

It's an open-source (type of license: BSD) in-memory data structure storage, also used by administrators as a database, cache or message broker. In GrandNode, we've used Redis for caching purposes.

CouchDB is nothing more or less than another one document-oriented, open source database. In the CouchDB, each document which is stored in it, has document-level unique identifier (_id) and revision number (_rev) for each operation, or maybe better call it, for each change saved to the our db.

6. The most popular SQL databases

The most popular SQL databases are easy to list, from the whole bunch of relational databases, we can distinct:

Without buzzwords, MySQL is the most popular open-source SQL, so relational, database management system. It's developed, maintained and hosted by Oracle Corporation.

It's one of the most popular commercial licensed relational database management system, provided and created by Microsoft.

7. Differences between NoSQL and SQL databases

From our point of you, it can't be an accident, that the biggest companies are using NoSQL databases. Look at eBay, Facebook, or Amazon. Each company uses the non-relational database management systems. I hope that created article at least lit up the topic of differences between the SQL and NoSQL databases. You should definitely read another one article, you are curious, why it's worth to use MongoDB in e-commerce.